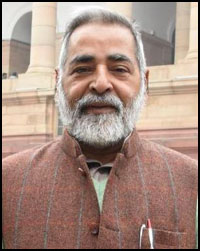 The All India Minority Front (AIMF) has written to the Mayor and officials of the North Delhi Municipal Corporation over non-payment of wages to its employees including teachers, nurses, technicians and others.

The AIMF national president Mr SM Asif accused the North DMC, the Arvind Kejriwal government in Delhi and the Narendra Modi regime at the Centre of not being concerned about the problems being faced by the people of the city.

Claiming that employees in the Rajan Babu Institute of Pulmonary Medicine and Tuberculosis (RBIPMT) in GTB Nagar had not been paid salaries for the past two months, he alleged that the North DMC was mired in graft at “all levels.”

Listing problems faced by the staff of North DMC, Mr Asif held the Delhi government responsible for their present plight.

The AIMF chief pointed out that nearly 8,000 teachers in the 714 North Delhi Municipal Corporation-run schools, who are currently deployed at the government’s food distribution centres amid the Covid-19 pandemic, have not been paid salaries for the last three months.

Mr Asif said that the government and the MCD should not let the teachers and other staff suffer.