All minorities in India should unite: Asif

New Delhi, 31 August, 2020 – Stating that democracy in India is under threat from the current governments, the All India Minority Front (AIMF) requested to all minorities leaders including Muslims  to unite and chalk out a plan to “save the country”

Addressing an unification conference in New Delhi, which was presided by Nasir Ahmed Idrish of Yuwa Jankranti Party,  SM Asif said, “Many minority leaders did not support our party and campaign for  others.

Mr Asif who is also national president of AIMF called for an open discussion to settle the differences. 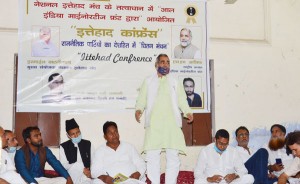 “Today all Muslim and minorities movements are different from our movements. If these forces combine, nobody could even think of challenging equality, liberty and fraternity in India,”  said Hazi Abdul Saami  Salmani, national president Indian Backward  Confrence.
Jishan Hyder Malik, Tahir Hussain and Ikrara Bharti from Muradabad, Nasir Ahmed- Johnpur, Nizammudin from Amroha, Mohy Yakubu Ali from Ballabgarh, Abdulla from Bulandshahr, Mohammad Yusuf Sheikh Sayyed from Delhi, and Nasir Ahmed from Delhi and hundreds others minority leaders have participated in the conference.