“We have formed an alliance, including the National Lokmat Party, the Kranti Morcha Dal and the National Secular Majlis Party to ensure the defeat of the JDU-led government in the state,” he said in a press conference at a Patna Hotel on Tuesday.

The AIMF leader claimed the people of the state want a change and so the BPA in its meeting decided that many other parties will be consulted in this regard and to contest all Bihar Assembly seats.

Mr Asif said the alliance would have a common agenda including  farmer loan waiver scheme, Rs one lakh in poor girl marriage, free bus ticket to women, unemployment benefit  Rs 3000, Old age and widow pension Rs 5000, half electricity and water bills are some of the issues they will insist on inclusion in the agenda. 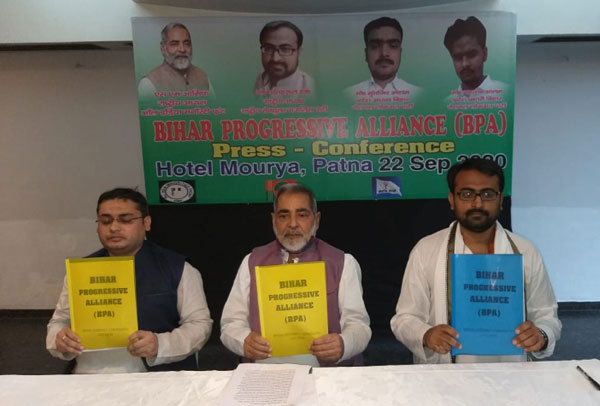 Mohd Asharul Haq, president of National Secular Majlis Party slammed the government over “virtual campaigning” and said it was “cheating and nothing else”.

While Mahatab Alam of National Lokmat Party cited figures to show how Bihar had been lagging in sectors such as health, education, industry, road and farmers’ economic condition. “Corruption has also been a major issue in this regime in Bihar…without bribe, no work happens here”, he alleged.
“At present, we all are here but many more leaders are in touch and will come with us with”, he added.