All religious and linguistic minorities should vote to defeat communal, fundamentalists and divisive forces : Asif 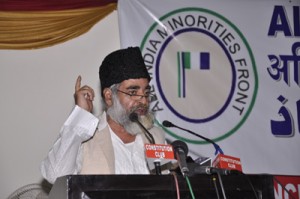 Mr. S M Asif, National President of the All India Minorities Front (AIMF) has appealed to all religious and linguistic minorities  to decide amongst themselves a common consensus candidate across party lines who could defeat communal, fundamentalist and divisive forces in each and every constituency and ensure that each and every vote goes to such a candidate, in the larger interest of the country and the democracy.

The Opporessed and depressed sections should unite in their battle of ballot in the ensuing assembly elections and discuss amongst themselves the winnablity of a progressive and secular candidate, so as to defuse communal divide and disharmony, that is already taking a centre stage in almost all the segments.

Mr. Asif in a multi lingual appeal cautioned that some elements are out to create panic and disharmony and only unity of these classes can be a befitting reply to such elements, by way of defeat. He hoped that people would use their wisdom and elect such candidates who are away from communal, fundamentalist and divisive mindset